Gary Christian / 101 Views of the Anthropocene

101 Views of the Anthropocene.

Gary Christian is a distinguished sculptor and painter with twenty years experience. He has had 17 solo exhibitions—in Sydney, Melbourne, Brisbane, Canberra and Hobart. Recent sculptural works include: ’Figures in the Landscape’’ (2012), for Mount Annan Botanic Gardens; ‘The Atomic Family’ (2012), for The University of Western Sydney; ‘Furnace’ (2012), for the Corrimal Cokeworks Hundred Year Centenary; and a 50 mtr high sculptural façade designed in collaboration with architects, Fitzpatrick and Partners, for 33 Bligh Street, Sydney (2012).

In 2009 The Travellers, a five-piece laser cut sculpture, won the Santos Sculpture Award. That same year Christian installed a wall sculpture, commissioned by Multiplex, at No 1 Shelley Street, Darling Harbour. Christian’s work has been hung in prestigious awards and exhibitions, such as the Archibald Prize, and he has undertaken numerous sculpture commissions.

My work responds to the deep connection human beings have with nature; a connection often lost in memory, often existing only in fragments. As cities dominate the landscape, our connection to the natural world diminishes, yet the natural elements are still held deep within our psyche. In life, we set off on a path, loop left, turn right, check around this corner, get led down one path, take off to explore another, yet as time moves on we see the patterns and connections of our existence.

Some back ground to 101 Views of the Anthropocene

I want the work to be a thoughtful meditation on our current predicament, rather than a hit over the head. I have called the show 101 Views of the Anthropocene. The paintings-on-paper, use Japanese Washi paper glued to heavier paper. There will not be a 101 paintings-on-paper, but it is an ongoing series. There will also be some sculptures, for interiors, domestic-size.

It has been said that the first atomic bomb, detonated at the Trinity site near Alamogordo in New Mexico on the 16th July, 1945 at 5.29 am, marks the beginning of the Anthropocene. That first bomb, and those that were dropped on Hiroshima and Nagasaki in August of that year, were created over 200 miles from Trinity at the secret Los Alamos site as part of the Manhattan Project.

The body of work that resulted in 101 Views of the Anthropocene comes from a research trip I did with my partner. She, writing about World War Two and Robert Oppenheimer (Oppie), the so-called the father of the atomic bomb; me, painting and drawing impressions of the Anthropocene. We travelled first to Japan—to Tokyo, Hiroshima, Nagasaki, and Miyajima, and then to a mountain studio to paint. I love Washi paper and on the way to the mountain studio, bought some in Kyoto. As I painted impressions of places on Washi I was influenced by my appreciation of Zen calligraphy. The final pieces I pasted onto French Archers paper, using rice glue. We then flew to the USA and I carried the Washi paper with me. In USA we went from Boston, to New York, Washington and San Francisco, visiting locations relevant to Oppie and the war. From Albuquerque, we drove to Santé Fe, then Los Alamos. New Mexico is a beautiful landscape of rocky desert land and flat top mountains— mesas (meaning table-top)—that is woven through with meandering rivers and stands of yellow cottonwood trees and whispering Aspens.

Our visit to the Trinity site—only open for two days a year and still radioactive—made quite an impact on me. To walk on this land and think Let’s blow it up! At the gates to the site there were people protesting: still seeking compensation for failing health from the fallout, and for the destruction of family desert farms.

I am an admirer of the Japanese artist, Hokusai, and am in debt to him for his Thirty-Six Views of Mount Fuji. All the sites I painted are in some way players in the making of the Anthropocene. 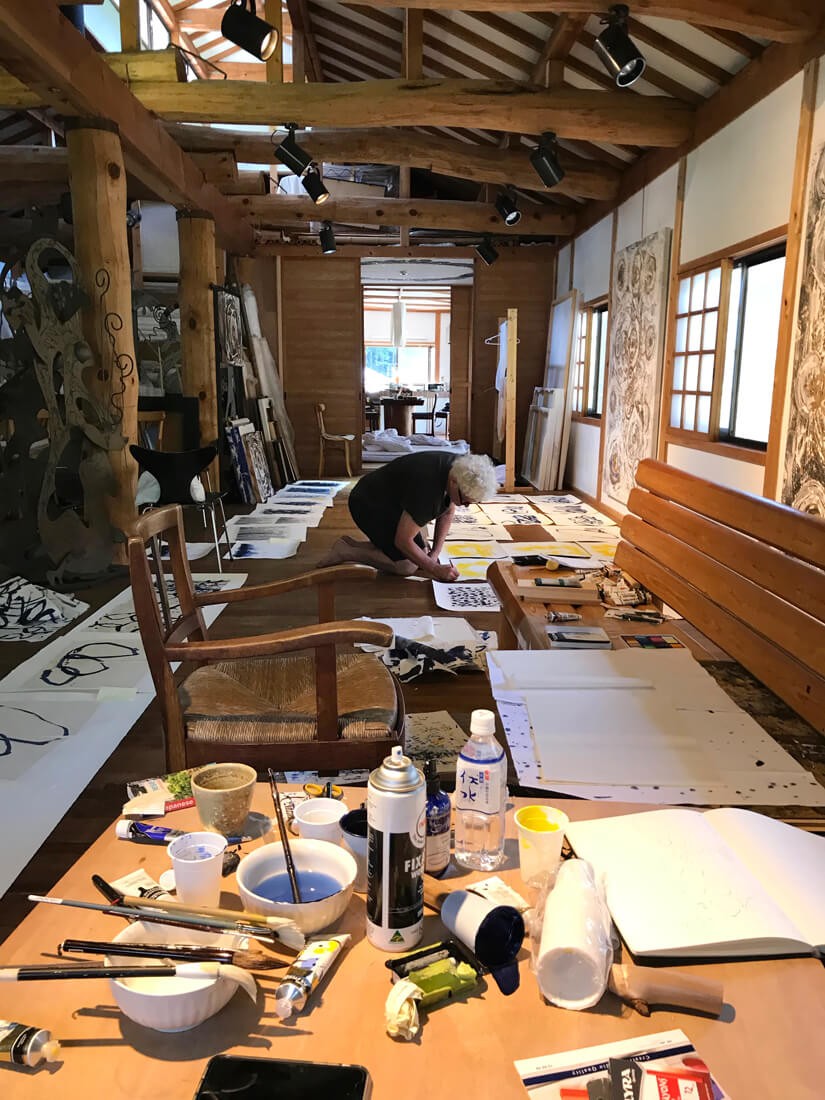 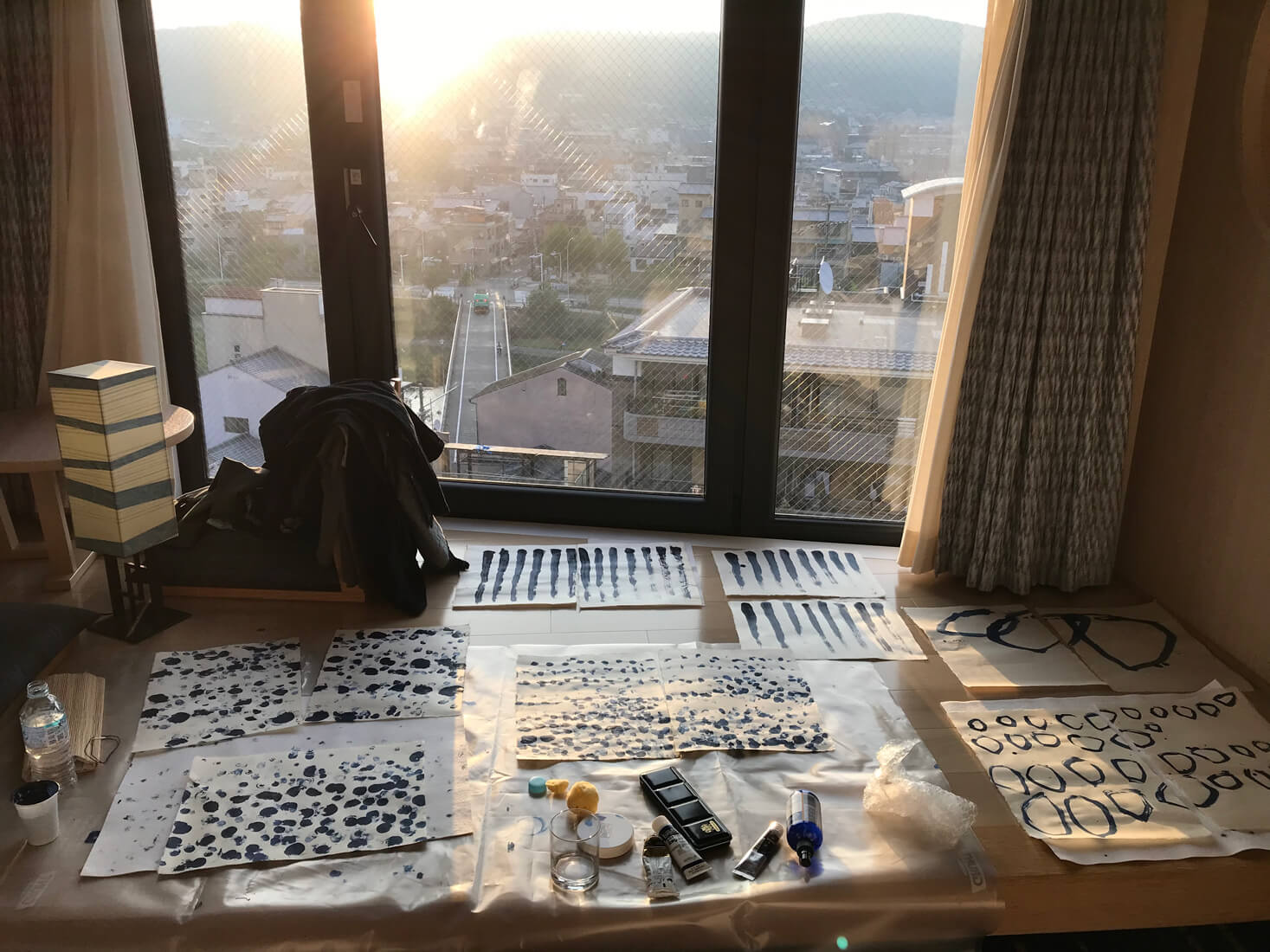