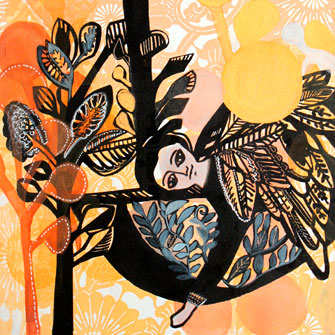 Fostering opportunities for practicing artists for whom printmaking is an important part of their work.

The emphasis is on mutual support for each other’s professional practice.

The group was formed in 1993 to foster printmaking in the area, and since it’s inception has exhibited regularly developing a particularly effective working relationship with the Sturt Gallery, part of the Sturt Australian Contemporary Craft and Design Centre at Mittagong, NSW, as well as with nearby regional galleries.

We currently have 28 exhibiting members and try to maintain membership at around this number. Over the years the SHP has built an enviable reputation for quality and innovation with members exhibiting widely – locally, nationally and internationally. Many also teach printmaking in tertiary fine arts courses and adult education programs.

Unlike many more recently established groups, the SHP does not have a physical base nor does it offer workshops on a regular basis. Rather the focus is on fostering opportunities for practicing artists for whom printmaking is an important part of their work. The emphasis is on mutual support for each other’s professional practice, organizing exhibitions of members’ work and developing links to other printmaking groups both in Australia and further afield.

In 2009, for example, the SHP initiated an international print exchange with print groups in Queensland, Wales and Hawaii. The portfolio of prints has been exhibited in the UK and Hawaii as well as different venues in Australia and full sets are now in the collections of the Australian National Gallery, Canberra, the National Museum of Wales and Rockhampton Regional Gallery in Queensland.

Our group recently celebrated their 21st anniversary with ‘Exchange’ an exhibition and print portfolio exchange between 26 member artists of the Southern Highlands Printmakers. An anniversary catalogue accompanied the exhibition which was first exhibited at Sturt Gallery Mittagong NSW followed by another showing at the Megalo Gallery Canberra ACT 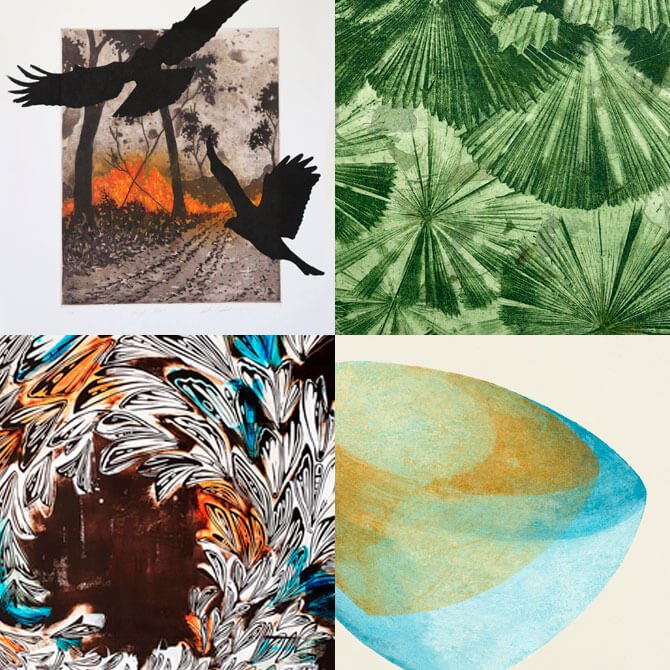 I draw upon two decades of experience in animation and illustration to produce images with a strong sense of design, layering them with local symbolism and narratives. I am in love with the medium printmaking; the strength and subtleties achievable are only limited by my imagination.

Since retiring from a career in commercial printing and book publishing, Linda has enjoyed developing her work in both printmaking and bookbinding. She is a member of the Southern Highlands Printmakers and the Bookbinders Guild of NSW. Her work is inspired by her environment, her garden, her travels and her interest in traditional and contemporary bookbinding techniques. Print technique is predominately linocut and collagraph. Bookbinding styles include Coptic binding, Belgian binding, Cased in binding as well as bindings with exposed threads and decorative elements.

Margaret Fegent has lived in the Southern Highlands for thirty years and is now based in Mittagong. She completed a Diploma in Fine Arts at Moss Vale TAFE and has exhibited in several local group exhibitions and with Southern Highlands Printmakers in Regional Galleries in Goulburn, Orange and Griffith.

While not confined to one particular subject, textures and changing light effects in the landscape are a common theme in her prints often developed from sketches and photos taken during travels in Australia and overseas.

The images of actual places are recorded in photographs; impressions are captured in sketch books with quick drawings and watercolours and these records then provide the inspiration for prints. She has enjoyed developing her relief printing skills with reduction and multi-plate prints as well as experimenting with different effects by combining linocuts with monoprints, collagraphs and collage.

My images carry symbolic meaning and oscillate between the internal and external world. They are moments of reflections and pauses when we are reminded of something greater embracing us.

Using several techniques such as drawing, mixed media and printmaking I explore the relationship of identity in conjunction with my own sense of journey and the role that spirituality shapes it. Creating multiply layers with various mediums these represent elements of journey. The narrative throughout my work can be influenced by many things my cultural ancestry my travels and my surroundings but they also include intimate gestures that are formed within the relationships that give me meaning.

I am interested in the sacredness of life. The moments that give us recognition of a path and inform me further towards my connection to the world.; within the world and to each other.

They are vignettes small openings into my own sense of spirituality that shapes and create a dialogue of understanding.

I have been a finalist several times in the Blake prize a finalist in the jacaranda drawing prize and winner of the Swan Hill Prize.

The inspiration for most of Gillian’s work comes from the natural world. Previously an educator, she believes that awareness and knowledge are keys to the development of a better understanding of conservation and environmental issues. She uses printmaking in a variety of forms, relief prints, etchings and collagraphs to record, explore and highlight the wonders of nature.